Like most musicians that work in the nebulous worlds of jazz and beat music in Israel, the four members of Apifera have been crossing paths with one another for years. Keyboardist Yuval Havkin has invited drummer Amir Bresler, bassist Yonatan Albalak, and keyboardist Nitai Hershkovits to collaborate on his various recording efforts, and all four have participated in sessions for the Time Grove Selections series of releases put out by Raw Tapes Records. It was in the latter project at the quartet finally realized that they were a perfect combination of sounds and sensibilities and decided to see what they could accomplish on their own.

In one fruitful three day session, the newly christened Apifera came away with Overstand, a glorious 10 track expression that flows freely from spiritual jazz and psychedelic R&B to lucid funk and J. Dilla-inspired beats. But unlike the more agitated vibes being conjured from the same sources by the broken-beat scene in London, this album is a purely laid back affair—the backdrop for late night dalliances and pupil expanding hangs. Which also makes it a perfect fit amid the discography of their label, Stones Throw Records.

There’s also a very tight group dynamic at play with Apifera. When reached out about being interviewed, they insisted that all four members of the group be in on the conversation. And during our chat, they revealed that they’ve been so inspired by what they can do together that there’s already a second album in the can and more music in development. | r ham 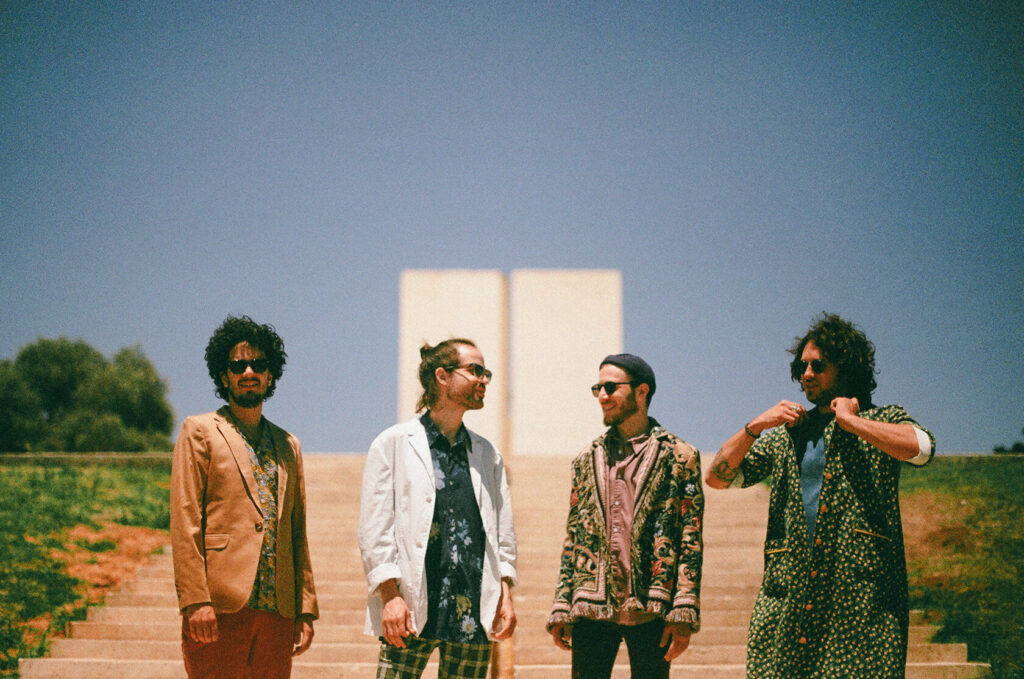 Aquarium Drunkard: Let’s start from the start. How did this project begin?

Yuval Havkin: We made that was part of the Time Grove series on Raw Tapes Records with all the people that had recorded for that series. We played on two tracks with this quartet and had a feeling that we should do a lot more with this ensemble.

Yonatan Albalak: It kind of stood out, genre-wise. It was more defined than the rest of the stuff. Not that the other stuff was bad, but this stood out.

Amir Bresler: It sounded like everyone wanted to go in the same direction.

Yuval Havkin: We all knew each other for years before and collaborated on many projects way before this album. But not as this quartet.

Nitai Hershkovits: Yeah, lots of collaborations. Basically this is a long overdue project that we all felt like we wanted to do. We were in the studio for two or three days doing different formats, and the last format we did was this quartet and we were all like, “Oh, we can really hear this is something special.” And the writing process because we always write in the studio. No one shows up with a chart.

Yonatan Albalak: I think two notable projects are Live Beat Tapes, which is a big group that everyone besides Nitai are a part of. And Layers. Yuvi produced their album with Nitai as guests. These are like two dots in space and time where we felt the energy bringing us closer.

AD: Is that pretty typical of the music scene is Israel with everyone getting to know everyone else and lots of collaborations happening?

Yonatan Albalak: It’s one of the strong characteristics of this country. It’s so small so everybody knows everybody. Everybody hears about a session with everyone. It’s really happening much faster than many other places I know.

AD: The lineup of Apifera is fascinating in that you have bass and drums, but the other two main instruments are synthesizers rather than a horn or a piano. Was that something you had in mind from the start?

Yuval Havkin: We’ve had a few different setups and we still do use a few different setups inside the band. Yonatan will play guitar sometimes and someone will play synth bass. Nitai plays clarinet. And then we have tracks without drums that Amir will play bass or synth. We didn’t really feel there was only one set up possible. Part of the feeling of this ensemble was that we can do different sounds with different instrumentation.

AD: It sounds like you guys had a pretty clear idea of what you wanted this project to sound like from the start. Or did that come from jamming and piecing together the direction of the group?

Amir Bresler: We all knew that we wanted to compose the songs on the spot, compose them while recording.

Yonatan Albalak: And we have experience in working fast. A lot of our projects are semi-improvised or completely improvised so we did a lot of jam sessions where you have no idea what’s going to come out. This particular period between 2010 and 2014, there were so many jams and jam bands and a lot of material would come to the surface without any need to preconceive it. So that gave us a lot of experience in how to crystallize that into a solid composition. So it’s not that we’re improvising the whole thing, but we know how to progress quickly until you can call it a tune.

Nitai Hershkovits: I think the fact that we’re all writing everything together really bridges something between all of us. Not everyone understands the same thing all the time so you can’t cut the grass the same height. So we’re kind of doing a process of figuring out where we understand each other the best. And I think composing together is one of those bridges that we found. To not define everything but to talk about feelings, emotions, landscapes, colors, whatever.

AD: The press notes for the album say that it only took a couple of days to record. Does that mean that what we’re hearing are shorter, edited versions of longer jams?

Yuval Havkin: We’re not really jamming. Everyone knows exactly what they’re doing. We might be improvising on something that was preconceived, but it was composed.  The tracks that you hear are a take. It’s not cut from anything. The album is not edited. We’ll set up the studio and everyone is plugged in and we’ll set up all the mics, and we’ll write the track. We’ll finish writing the track by playing it. And we’ll play a few takes and that’s what you hear on the album. We’ll do around three or four tracks like that in a day, so in two or three days, you’ll have an album.

AD: How much was the album shaped through overdubs or through the mixing and mastering process?

Yuval Havkin: Most of the album is without overdubs. We did some but everything—the reverb, the effects—is recorded as we played it. Before we hit record, we have to have the picture and the image of what we want sound-wise. So there’s not much of a big difference between the recording and the mixing. And I have to say, we sent Stones Throw 10 tracks at the end of the three days we recorded, and they asked us if it was the master file.

Yonatan Albalak: The post-production is just to polish it and make it sound perfect, but the artistic choices are happening on the spot.

AD: The press notes also talk about how the music was inspired by certain spiritual and psychedelic experiences that one or all of you have had. Is that something you can talk about?

Nitai Hershkovits: I think we all bonded in some way through these experiences. When I talk about colors and shapes and textures, I’m also talking about psychedelics. And it doesn’t have to be a substance. It could just be that state of mind that we manifest. It’s just a tool we can use. The more we talked about it, the more it intertwined with the music.

Yonatan Albalak: The psychedelic scene in Israel is huge. There’s a huge trance scene here. It’s been like that since even the ‘70s. Tel Aviv was already on top of everything. There’s something very psychedelic about the community in Tel Aviv.

Yuval Havkin: Psychedelics are a tool. It’s not necessarily like, “Hey, let’s take shrooms and record.” It’s taping into that zone, which people normally get into through meditation or lucid dreaming or through drugs. It’s an abstract place, but it’s still very tangible. So we look to express that in our music. Sometimes it’s imagining an abstract place, which either you’ve been to in a dream or in a trip or something you’ve seen in a movie. Whatever captivates you and gets you going in this direction, which is not your 2D reality. A higher dimension.

AD: A fair amount has been written about how Israel has been producing a lot of great music over the past few decades. In your minds, what is it about your home country that is so conducive to creativity and inspiring all these amazing musicians?

Yonatan Albalak: The pressure cooker. It’s a jungle. And the chutzpah. It’s kind of the egg and the chicken, but you could also say that because it’s so stressed here, people develop this kind of attitude that propels them forward to become themselves. And that’s a great advantage in improvised music.

Nitai Hershkovits:  It’s also logistics. It’s not easy to come in and out of the country. You have to fly. I think that makes it so inclusive in the best way. Most people stay here and play the same places and that creates feedback. People know everybody and play with everybody and share their knowledge. And people coming from the outside share their knowledge. It’s very small here. You can’t go up or down or to the east because you basically have the sea. So think that contributes as well.

AD: That does touch on the question I had about whether it is easy to make a career out of music staying in Israel or if you need to get out of the country and meet other musicians?

Amir Bresler: If you want to play instrumental music and jazz, you can’t play in Israel all the time. It’s not enough. You really want to go out and play for different audiences to really make a living.

Yuval Havkin: It means every Israeli musician who plays instrumental music who wants to make a living has to work in a different market. A lot of Israeli musicians are working in France, in Germany, and in England and in the States. We can’t really advance in Israel because there is such a small crowd. If you’re not singing in Hebrew or doing anything that can work on a mainstream level, they all have to find a different market to work with.

Excursions in sound. Dig this flavor of culture reportage? If so, support us through Patreon. Help us continue to produce mixtapes, podcasts, radio shows, a/v joints, interviews, features, and much more.