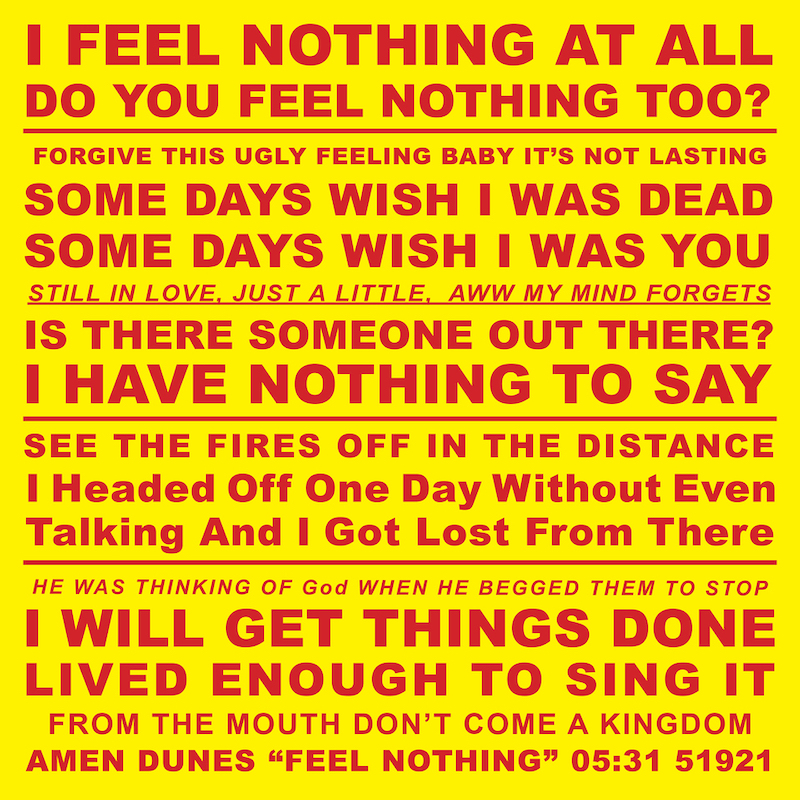 Last we heard from Amen Dunes, he was chanting Freedom, an oceanic surge of devotional sonic mysticism expanding infinitely around him. Now, on “Feel Nothing”—a new track with Sleaford Mods and the first new music from Dunes’ Damon McMahon in three years—he chants Kingdom. Upon a heavily percussive subterranean dancefloor, the patron saint of the underworld materializes to reclaim his throne. Levitating above the embers of a bleary and distant techno sphere, he forecasts: “You might be a prophet.”

A now reliably silent killer with a lyric and a groove, it’s not unreasonable to think of McMahon as a rapper, especially here—in the company of kindred spirits from across the pond who are well practiced in laying bare society’s ills while keeping it lit. As above, so below: synthesizer sirens ringing around a strobing rhythm, McMahon acknowledges larger, more oppressive forces pulling the strings in a world in which, yes, even someone who carries it like he does can get low too.

So he meets the Mods somewhere in the middle of his own askew, Pacifica pop and their dizzying desolate bangers: down in the slums but working to visualize themselves victorious above lunar tides. “I headed off one day without even talking,” McMahon sings, “and I got lost from there…He was thinking of God/when he begged them to stop/Is there someone up there?/You will never know she said.” He’s undeterred by the fatalism, moving forward in knowledge that “There is no way to stop our big stone love / Keep going up the mountain, yeah.”

He shines about in avant-moonlight motions juggling a naked vulnerability with a determined will to push back against the dark. “The king might prevail / But just for today,” he sings, and when that long teased beat finally does drop, the dance floor is stark in its restraint— just McMahon and the Mods’ Jason Williamson in a gentle echo-chamber duet, while a woozy club beat and the revelers, congregants, and sinners of Amen Dunes’ increasingly widened canvas blur into a distant, nocturnal impressionism. Technicolor flashes of dissolute indulgence giving way to an orange and yellow glow—some fires still blazing, sirens still singing, and the little goddess still speaking.  Somewhere amidst it all, McMahon is still playing religious music, and his religion is still love. | c depasquale