The Master Musicians of Joujouka :: Live in Paris

The Master Musicians of Joujouka :: Live in Paris 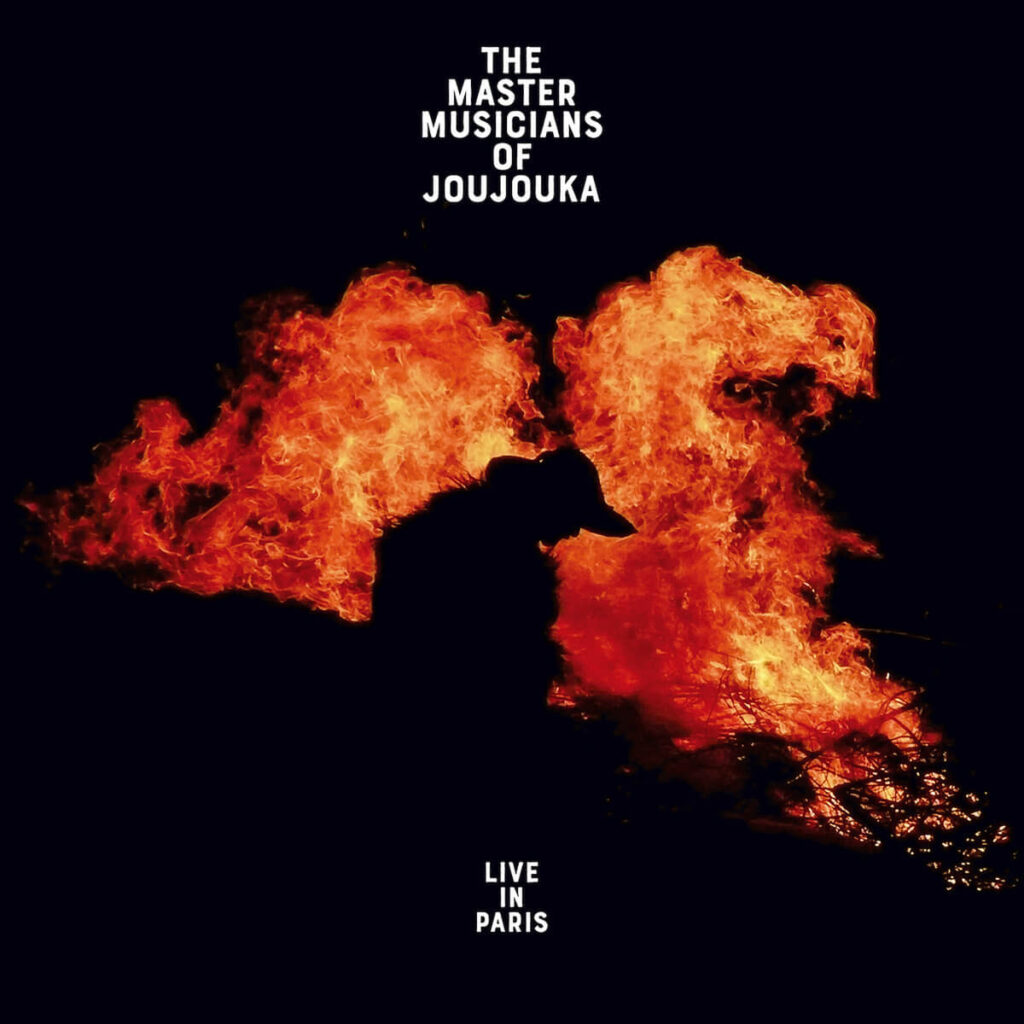 The journey to the fabled Moroccan village of Joujouka typically begins in the coastal city of Tangier, which has long attracted a motley assortment of expats, weirdos, scofflaws, and cruise ship day-trippers. Taking a southbound train to Ksar el Kebir, the urban bustle gives way to low and rolling dun-colored hills, sunflowers and olive trees. Little towns and villages dot the landscape, with square brick minarets towering and blue mountains looming low in the misty distance.

From the train station at Ksar el Kebir, just past the administrative outpost of Tatoft, a small sign points up a steep road toward a place called “Zahjouka.” This humble slab of one-lane pavement leads to magic.

This village—whose name is variously transliterated as Jahejouka, Joujouka, and Jajouka—has long held a magnetic attraction to a certain kind of figure: flamboyant, creative, adventurous. The attraction, of course, is the Master Musicians of Joujouka. This storied ensemble performs a particularly intense local variety of trance-folk music. The music—along with the hashish culture indigenous to the area—has been featured in the fever dreams and cosmic fantasies of notable visitors like Paul Bowles, William S. Burroughs, Brian Jones, Ornette Coleman, Donovan, and Bill Laswell.

While the hipster cognoscenti’s interest has brought welcome attention to the village over the past several decades, it has also clouded the conversation about Joujouka. Layers of Orientalist mythologizing, regrettable mashup collaborations and Beat Generation woo-woo erase the deep Sufi spirituality at the music’s core. With a style rooted in place and tradition, Timothy Leary’s appellation of the masters as a “4,000-year-old rock ’n’ roll band” comes off as silly as it is ahistorical. A tedious ongoing feud between two factions of the group presents a further distraction.

All of this backdrop and baggage contribute to the reason that Live in Paris such a vitally important document of the Master Musicians of Joujouka. The album captures the more credible of the two versions of the group in 2016, at the height of its power. They were fresh off a Japanese tour and had spent nearly a decade hosting a highly regarded micro-festival in their village (which this writer has had the good fortune to attend thrice).

This pristine recording is the first to showcase the music with the appropriate fidelity. Within its intensity, Joujouka music is filled with nuance. Live in Paris captures the deep overtones of the drums, the gentle breathiness of the wooden lira flute, and the intergalactic wail of the double-reed ghiata pipes. Listeners can hear this music in all of its sonic and spiritual heft, roughly approximating the sound of a performance in the village.

In a reprise, “Brian Jones Zahjouka Very Stoned” documents the 1968 visit to the village by the Rolling Stone, who is still venerated by the villagers. During that visit, Jones recorded the album that would be released posthumously as Brian Jones Presents the Pipes of Pan at Joujouka. That album did more than anything to bring Joujouka to worldwide attention. The masters show their gratitude with their only English lyrics: “Ah, Brahim Jones/Zahjouka very stoned.” The first half closes out with a frenzied reprise of “Jahjouka I Calihone,” which transitions into “Moulay Abdeslam.” The energy rises.

Everything in the first half is a buildup for the album’s tour de force: a nearly 45-minute performance of “Boujeloud (Parts 1 & 2).” Boujeloud is the name of the terrifying half-man, half-goat personage who, legend has it, taught the villagers how to play this music centuries ago. Boujeloud’s story is played out during this piece, portrayed by Mohamed El Hatmi, who does a little shake-shimmy-shrug dance while wielding a branch for dispensing discipline and/or transmitting blessings.

The piece builds relentlessly, with call-and-response on the piercing double-reed ghiata. The masters sometimes stop suddenly and shift gears, alternating between hard-driving jackhammer passages, slinky sensuous rhythms, and frenzied extended drones. Just past the halfway mark emerges repeated melodic line that, to me, has always sounded like a mutated passage from Gershwin’s “Summertime.” There’s plenty of pipe-skronk freakout that makes Albert Ayler sound subdued by comparison.

In village performances, this piece can last several hours, ending just before dawn and leaving the audience both drained and refilled. This process of renewal is the point of the music, because it has long been considered to have curative properties. Artist and Joujouka native Mohamed Hamri once wrote that the music’s energy could be sent directly to the brain. “Such a powerful contact, with a sound and pitch so high, could be used with the blessing of Allah like a surgical tool to heal sick minds,” Hamri wrote.

It all has to do with baraka. In Islamic mysticism, baraka refers to the divine force that flows from the spiritual to the physical realm. Contact with this energy delivers feelings of psychic bliss and abundance. On a surface level, Joujouka is a group of musicians. On a deeper level, they are sorcerers who channel and direct the flow of baraka very effectively. On “Boujeloud (Parts 1 & 2),” the energy positively flows from the headphones.

If music is medicine, Live in Paris is a pure, high-powered remedy. It’s potent stuff. | b bowe