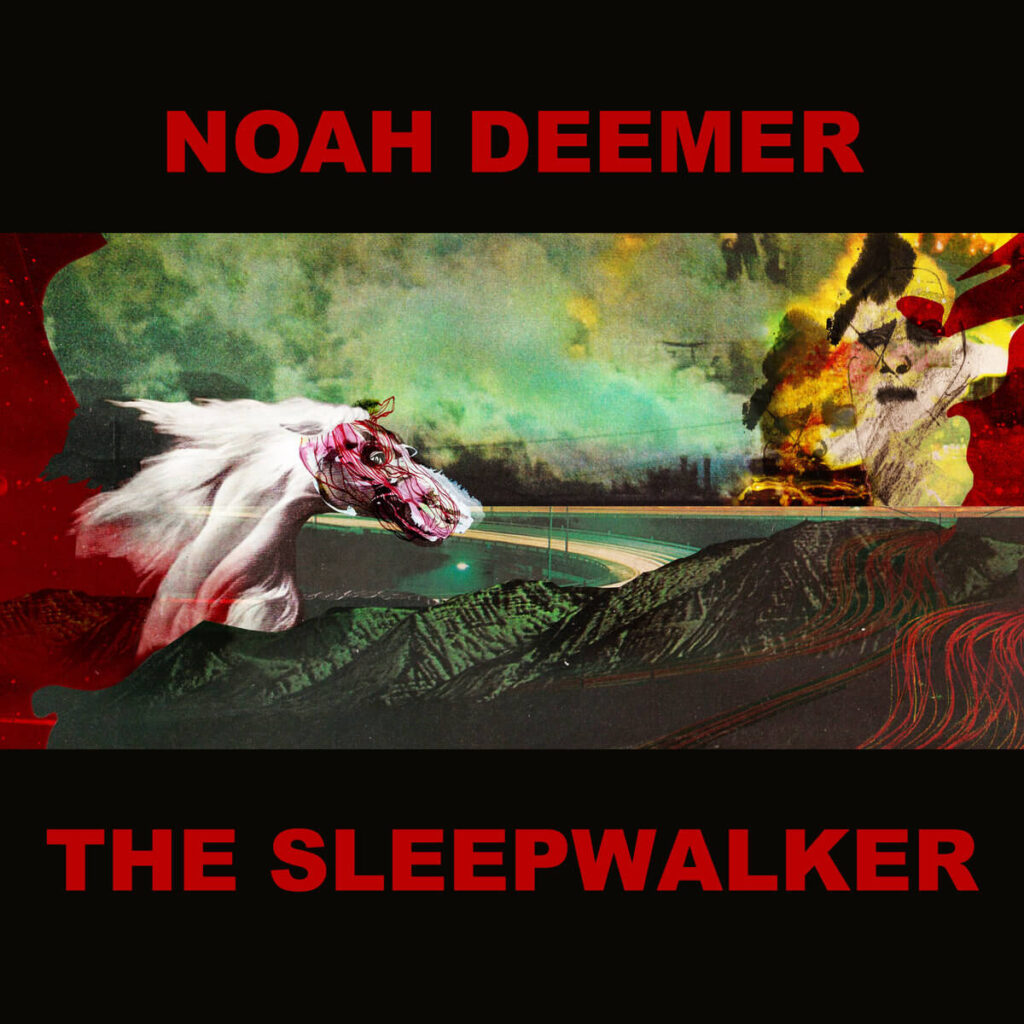 When the somnambulist in The Cabinet of Dr. Caligari first wakes, he finds himself strapped into a close up. With bulging eyes, he stares out at the crowd of fairgoers, piercing through the reverse POV shot into the darkened theatre. On The Sleepwalker, his debut EP, Noah Deemer’s deconstructionist pop inhabits and distends the conventions and contradictions of its medium to similar effect: the listener is made to be a participant in the awakening, the moment of creation.

In Deemer’s manipulation of pop forms, disrupting the tonal regularities of one genre or era with that of another, the act of listening is synthesized with that of performance. He introduces known melodic conventions, only to swerve out of an anticipated progression into one which is surprisingly divergent. The EP opener, “Modern Ruins,” which was first written as a commercial jingle, becomes, after its warm opening chords, a heavy, riff-driven flood of guitars, drums, and synth. This emotive switch brings about a kind of displacement, in which the personal and the commercial rise up through compositional or performance-based strata, as a heavy rock dropped in water brings things to the surface.

A few years ago, after a period of mental upheaval, Deemer started seeing a hypnotist on the Upper East Side in New York. It was during these hypnosis-induced trance states that he began having visions of his childhood home in Durham, NC. Ever-present in these was a hazy figure vibrating softly at a distance: moving either towards or away from him; perhaps it was the artist himself, or some other detached observer.

Unlike the somnambulist in Wiene’s film, the sleepwalker which forms the spiritual heart of Deemer’s EP is a faceless contrivance, trapped in an interstitial space between the artist’s internal state and the twin composition playing in the listener’s head. “Sleep…walker, sleep…walker…” the vocals echo, as the title track closes in a blur of recognition: the foreboding vibraphone tinkle—a spine-crawling pulse rising amid the guttural synth, the numbing distortion, the overwhelming blaze of shock and awe.

Deemer’s past musical projects include stints with Gross Ghost, No One Mind, and most significantly, as a drummer and sometime-songwriter for The Toddlers. As a bandleader, he deftly integrates the medley-like vocal phrasing of an assured improviser with the guitar, strings, horns, and percussion of his collaborators. On “Lay Your Hands,” the track’s soft instrumental backing brings Deemer’s vocals to the fore. What begins as high, airy, wordless noise suddenly takes shape. “Ooo, baby,” he sings, before dipping into a deep, quavering Elvis-like bass: “you lay your hands on me.” Donning the sheep’s clothing of other eras, other vocal arrangements, he covers several octaves in a matter of seconds.

For “Underwater Green / Coming Down,” the story behind the song is in fact set by water. A few days into a three-month sailing trip, Deemer’s boat docked at a nearby island. We hear muted sound-tones, slow, deliberate movements, as in a water ballet held under the surface. In the ambient padding of Fender Rhodes and matte saxophone finishes, Deemer captures a likeness of the rooted plants he spotted at the base of the ship’s hull, fluttering in the current. This instrumental intro cedes to a deliberately hoarse, bodiless vocal, which pitches and flails over a sputtering drum machine.

Studio recording is a Frankenstein-ian act—you cut, overdub, reassemble, in what seems a hopeless, mad attempt to make a vessel that will sustain life. Working your way down from the head to the chest, shimmery dream pop tapers away to surging guitar tremolo, quickly replaced by crunching levels of distortion. Deemer’s sleepwalker is the casting of form and substance, the Master Surgeon’s incision, the play of light in a distant recess, the fallibility of the human mind, susceptible to chance, time, image, and of seeing the self in all things. | h wheless