Military chemists have revealed the secrets of combat training

The unique Russian town of Kostroma, where modernity and past centuries are intertwined in the best possible way. The homeland of Ivan Susanin, the cradle of the Romanovs' house and the place of residence of the Snow Maiden. And in this provincial quiet, cozy city there is an alma mater of military chemists – the Academy of Radiation, Chemical and Biological Protection. On the eve of the Day of Radiation, Chemical and Biological Defense Troops, the MK correspondent saw how specialists are being trained to deal with the invisible, but one of the most terrible enemies.

– We were lucky with the weather – the mood of the accompanying officer on this cloudy morning is clearly better than mine. 2 degrees Celsius outside does not add vigor.

– And they promised snow, it would be nice for us to have time for everything here, – continues my guide. – By the way, I took you a pea jacket, you didn't dress for the street.

Pea jacket is good, you can hold out for a couple of hours.

Polygon Peschanoe, border of Kostroma and Yaroslavl regions. My acquaintance with the specifics of the military chemist service began here. 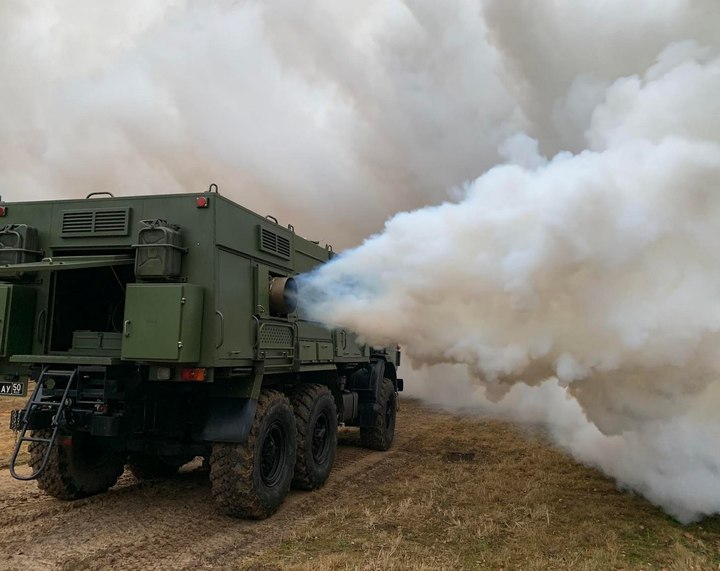 Smoke machine TDA-3, with it can be used to hide from unwanted eyes almost everything & ndash; both people and technology. Two female cadets of the academy have been instructed to demonstrate the preparation for the work of military equipment.

The TDA-3 machine is designed for setting surface and raised aerosol curtains to mask troops and objects from reconnaissance systems and targeting high-precision weapons in the visible and infrared range, as well as for special processing.

All elements are installed, necessary the buttons, in the variety of which only the pros can understand, are on, the machine is ready for work. And now thick white smoke is pouring out of the nozzle, gradually wrapping itself up and hiding everything around. Spectacular spectacle.

At the second stage, the girls, dressed in special protective suits and gas masks, are already preparing to show how the transport is processed using an aerosol disinfection kit. As a conditionally infected object – an armored personnel carrier. As the military said, this method of processing is suitable not only for transport, but also for structures and individual processing.

The officer said that at the beginning of 2020, in the first wave of Covid 19, chemists were actively involved in the fight against a dangerous infection. For example, they carried out special processing of aircraft arriving in Russia from countries with an unfavorable epidemiological situation.

At the military airfield in Chkalovsky, the external and internal parts of aircraft, cargo and crew members were processed in this way. Military chemists handled over two hundred aircraft and over ten thousand tons of cargo.

One of the most powerful jet infantry flamethrowers of increased range RPO-A “ Bumblebee '' – the pride of the RChBZ troops. Even the video of their combat use is impressive. You involuntarily flinch from the roar at the moment of the shot. In reality, & nbsp; it looks much cooler. & Nbsp; You almost jump in place during the volley. The flamethrower also weighs a lot, about 11 kilograms. The weapon is not at all feminine. But, as they say, “ the eyes are afraid, but the hands do. '' Even fragile female hands. By the way, the girls shoot quite confidently.

– These are such exciting emotions, they are even difficult to describe in words, – cadet Valeria Shilova shares her impressions. – You have to feel them yourself. When you stand to the side it is one thing, but when you hold a flamethrower in your hands, everything is different.

“Before that, we practiced shooting from a flamethrower on the Janissary training simulator,” her twin sister Veronica picks up the girl’s words. – And even despite the fact that it is as close as possible in weight to the original, the real weapon is completely different. It was very exciting. We fired for the first time. And just one try, you can't reload the flamethrower.

Both scientists and military

“The Military Academy of Radiation, Chemical and Biological Protection is a multidisciplinary university,” says my attendant as we walk along the parade ground to the educational building. & ndash; Here they prepare & nbsp; highly qualified specialists for the troops. In the context of a difficult epidemiological stop, future officers are being trained to deal with coronavirus infection. Previously, the academy was located in Moscow, and since 2006 it has been located here. More than two hundred lieutenants graduate from these walls annually, specialists in their field, who are distributed throughout our country.

During theoretical studies and in laboratories, cadets look more like scientists than military. And it's not just white coats, protective masks and gloves. The variety of various instruments and test tubes on the tables, focused faces, all this indicates the seriousness of the process.

– Now a lesson is being held in the laboratory on the topic “ Preparing samples of pathogenic biological agents for the presence of coronavirus infection by PCR. '' Complex analytical equipment is used, – explains the teacher of the department. – Such equipment is in service in mobile mobile chemical biological laboratories of the RCB protection troops.

– Calmness, pedantry, attentiveness. We have many small devices, there is a danger when working with microorganisms, great care is needed. In this regard, girls, of course, find it easier, since women are by nature more assiduous. But boys, on the other hand, are better versed in equipment.

– With the necessary knowledge and skills, women are able to perform tasks in any position. Perhaps, with the exception of those where male physical strength is needed.

Cadet Ekaterina Los, came to Ostrovsky's small homeland from Vorkuta. It was not the first attempt to enter a military university, she says. The competition among girls is large – 7-10 people per seat. But it's worth it, says Catherine. Even in spite of the initial difficulties, the study is very interesting. There are no indulgences for girls. They live in the barracks, take up the outfits, go to the exercises. All – on a par with men.

– About the family, of course.

A unique unit at the academy & ndash; scientific company. Here, military operators, in addition to the main tasks assigned, are engaged in the development and testing of new personal protective equipment and other developments that help, including in the fight against covid.

Not everyone can get into such a service. In addition to specialized education, you must also successfully pass the competition. Most of the time, young scientists are engaged in the development of protective suits, respiratory protection, masks and respirators for medical workers. They design protective equipment and select materials.

Private Anton Ananyev, having completed his master's degree at the Tambov State Technical University, decided to give his debt to the Motherland and asked to join a scientific company.

– I decided to apply my knowledge and skills acquired at a higher educational institution for the good of the Motherland, to save human lives in difficult times.

They showed military and training classes where cadets learn the basics of handling complex military equipment on the Kaunas multimedia simulators. This is an exact virtual copy of a combat vehicle, which is used to train crews of heavy flamethrower systems. There are Janissary simulators to prepare flamethrowers for firing from RPO-A rocket infantry flamethrowers.

“We must leave the university as competent commanders,” says cadet Dmitry Mileshin. & ndash; We have a wide range of tasks. We must know chemistry, biology, and ballistics.

Having talked to future officers during the visit, you begin to understand that all these guys are united not only by the desire to get a prestigious a military profession, but also a sincere desire to help people. And with this attitude, any difficulties are within reach.