It seems that the United States has realized the importance of Russian hypersonic weapons, which President Putin announced back in March 2018 … True, it took the Americans more than three years for this. And finally, the Wall Street Journal in 2021 publishes an article by the vice president of the military consulting company Telemus Group and the retired US Navy captain Jerry Hendrix. In it, the officer admits that the means of destruction available to Russia and China “drove” American aircraft carriers from their shores to such a distance from which carrier-based aircraft simply cannot reach the desired targets. 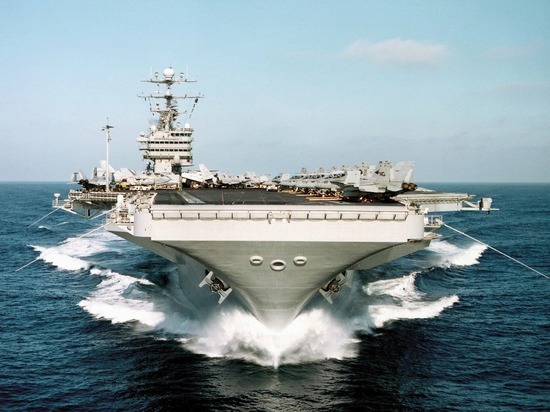 How did the US Navy earlier use strike aircraft carrier groups (aircraft carrier and combat support and cover ships) in the wars against Yugoslavia and Iraq? They drove the aircraft carriers almost close to the coast and organized waves of air attacks on important targets in the victim's territory. Hundreds of carrier-based aircraft took part in massive raids. The result of those wars is known – Belgrade and Baghdad surrendered.

But in a war with Russia or China, writes Jerry Hendrix, this number will not work. Due to Russian and Chinese missiles, aircraft carriers will not be able to approach the enemy's shores closer than 1800 km. And the range of the F-35 “stealth” carrier-based aircraft is no more than 1120 km. Dead end.

At the same time, the aircraft carriers themselves – huge and not the fastest ships – are turning into an easy target for hypersonic high-precision missiles. And Russia and China have such missiles.

Jerry Hendrix offers several solutions to the problem. For example, create long-range attack deck drones or build smaller aircraft-carrying ships armed with missiles. But such programs cannot be quickly implemented. It takes decades and hundreds of billions of additional dollars. And we, as they say, already have everything.

The Russian Navy has designed mobile and stationary coastal missile systems “Bastion” for an average range of up to 500 kilometers. Their weapons are the 3M55 Onyx supersonic anti-ship missiles. The feature of these missiles is the ability to fly to a target in a flock, exchanging target data in flight, choose the most significant and strike with an irresistible vertical strike.

The Dagger air-missile system with the Kh-47M hypersonic missile has a much greater range. The missile carried by the MiG-31K high-altitude interceptor can accelerate to a speed 10-12 times higher than the speed of sound – more than 10 thousand km/h – and hit targets at a distance of up to 2000 km.

” Daggers “are already on alert in the Southern Military District and, presumably, will soon take over duty in the Pacific Fleet.

Dagger missiles are too tough for any US missile defense system. Due to the enormous kinetic energy, it will sew the aircraft carrier from the upper deck to the hold itself. The defeat is almost guaranteed.

And, finally, a novelty – the Zircon hypersonic missiles. A series of successful tests was carried out on board ships and a submarine. From 2022, as they promise, “Zircons” will go into service with the Russian Navy. The speed of the rocket, according to various sources, is from 6 to 8 times the speed of sound. The flight range is 1500 kilometers. The mass of the warhead (200 kg) is sufficient to sink any warship, hitting the right point.

It is hoped that this entire arsenal will be appreciated not only by the retired American military, but also by the military -political leadership of the United States. And he will draw the right conclusions – is it worth talking to Russia from a position of strength? Or is it better to negotiate on equal terms.

And you can probably also be glad for us that when choosing a strategy for the development of the fleet, we did not pursue ruinous programs for the construction of expensive aircraft carriers, but chose a much cheaper and much more effective way of creating “aircraft carrier killers.”/p>