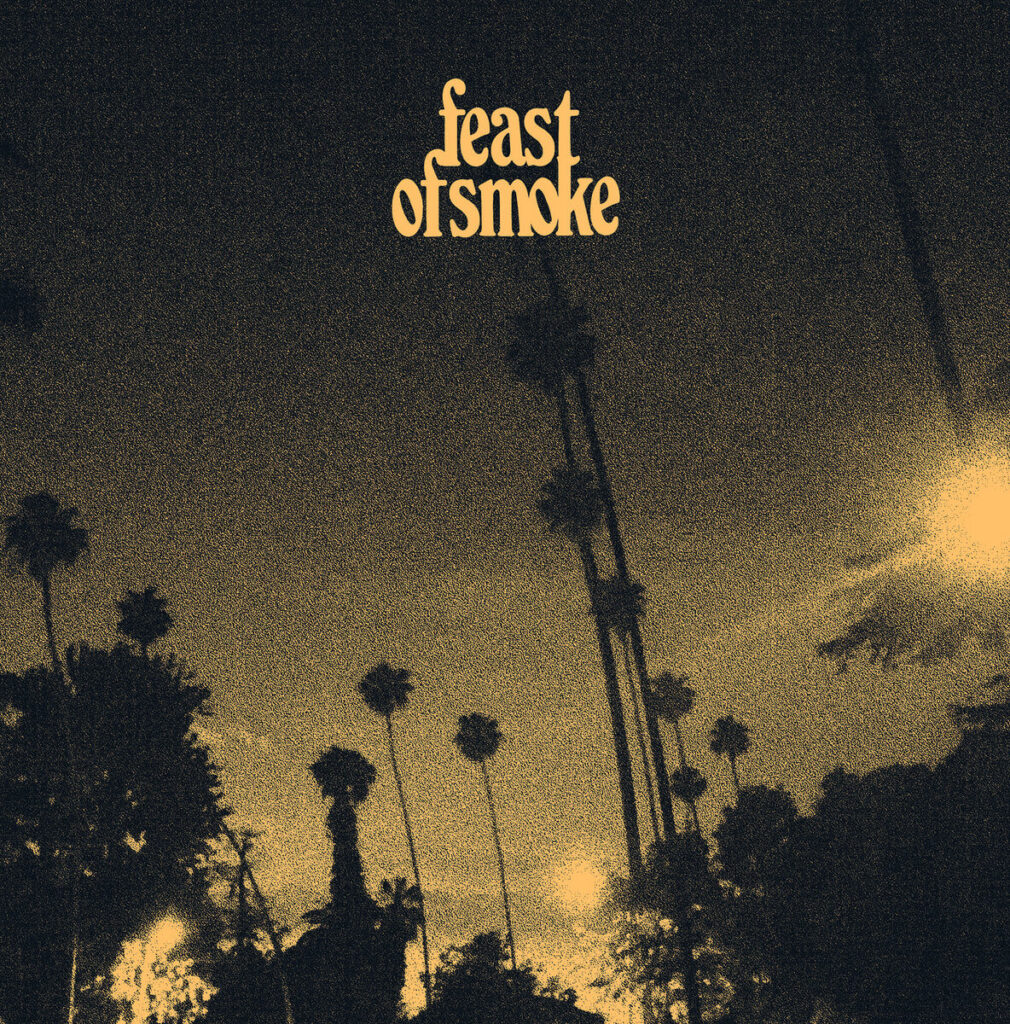 On the self-titled from Feast of Smoke, husband and wife Paul and Amber Oldham wrap their voices together over stripped down guitars, trading noir haze and cryptic lyrics. Best known for his work as an producer, engineer, and his many collaborations with his brother Bonnie “Prince” Billy (including mastering work on this year’s triumphant Superwolves return), this new setting finds Paul playing Lee Hazlewood to Amber’s strident Nancy Sinatra, backed up at key moments by familiar collaborators, including Neil Hagerty of Royal Trux, and Patty and Larry Schemel of Death Valley Girls. Though the record was assembled over years and stitched together from various sessions, it feels like a singular whole, custom built for late night drives and given over to stark blues, narcotized rock & roll, and swampy meditative zones reminiscent of Brightblack Morning Light (whose 2004 debut Ala.cali.tucky was produced by Paul). Amber and Paul joined us for a discussion of record practices, the value of outside collaborators, and recognizing that it doesn’t take much more than a great riff and vocal for a song to work. | j woodbury

Aquarium Drunkard: How long have the two of you been making music together?

Paul Oldham: Well, we were married 10 years ago. We did stuff together before then, but we started collaborating seriously on music around that time. Some of the songs on Feast of Smoke, we did in the last six months or a year, [but] then others we did up to eight years ago. Putting all those things together, there’s a theme.

Amber Oldham: There were a few songs that we just sort of knocked out over the course of a few weeks, and then other songs we’ve chipped away at off and on for years. Because of the different musicians that we’ve worked with, the songs have their own kind of energy.

AD: Was it a situation where you found yourself with recordings that the two of you had made and you thought, “What would take this song where it needs to go? Is to have Patty and Larry Schemel or Neil Haggerty jump on it?”

Paul Oldham: We were really lucky when we moved to Los Angeles, our friend London just introduced us to Larry. And he was in between bands, it was right before he joined the Death Valley Girls, which he’s very active with now. It was really cool to play with him. We needed a drummer for a show and he was kind enough to bring Patty in, who was really awesome to work with. I just wanted to document that. We recorded a few songs together, just in our practice space for posterity. I took those songs to Denver where we worked with Neil on production. Our friend Collin Gagon’s brother Jeremy, who lives in the Bay Area, played drums on “Dummy Check.” We recorded with Phil Manley, who is someone I’ve known from way back, from Trans Am. I knew he was working at a studio there. I just wanted to do some stuff with him because I thought his aesthetic would be cool.

I don’t really like going into studios very much. Being a recording engineer for so long, it’s something I’ve found I do not enjoy. It just feel so stressful. But that was a fun session. We got this sort of an outtake, actually, then I just worked it and reworked it over the years to get the version that we have on the record. And then on “TV Queen” that was just another iteration of our band in Los Angeles with our buddy, Brian Girgis, who plays in the band Lower Case. He’s played in multiple bands over the years. He’s great. He runs a barber shop in Los Angeles.

AD: Paul, I know a fair amount about your musical history. Amber, can you tell me what your earlier musical experiences were like?

Amber Oldham: I come from a musical family. My grandfather is a jazz musician, he plays bass. I grew up in a household listening to jazz. I’ve always had an appreciation for music, but I’m not a classically trained musician. I enjoy playing the piano.

AD: Some of my favorite bands, including Yo La Tango or Low, feature married couples. Obviously the music draws from that intimacy. But it makes me think about how important outside collaborators can be too, in terms of what they bring to the table, and how they are outside of that close connection you two share. What kind of discussions do you have with collaborators about how they can fit into this thing you’ve made?

Paul Oldham: I like to sort of give people more or less free rein to do what they want to do. The song is sort of the song already, but I’m not talking to any of these people and mapping out a drum part or mapping out the guitar part, beyond perhaps suggestions, because I’m confident that these people know what they’re doing. It’s fun for me to bring that into the mix, t’s an element that takes it a little bit out of our control.

Amber Oldham: They offer a fresh perspective and bring a spirit of playfulness. Our music can be more somber. Often Paul and I are just kind of alone in a room, working over songs, and bringing in other people provides more levity and perspective.

AD: So aside from a few remote sessions, you did this mostly at home. I think you can hear that homespun feel.

Paul Oldham: Yeah, we would just record it in our apartment or rental house, in whatever in the room—or section of room—that gets designated as “the studio.” In L.A., it was just literally part of our bedroom.

Amber Oldham: In L.A., we have to be really quiet because the walls are so paper thin. We can literally hear a neighbor brushing his teeth.

AD: I had to imagine that influenced the volumes that you were recording at.

Paul Oldham: There’s other reasons for why the volume is the way the volume is. But yeah, it’s just like, “I don’t want the neighbors to be worried about what I’m singing about.” [Laughs]

AD: Do you ever find that like, those kinds of constraints, IE space or volume restraints, help in terms of generating stuff you that kind of stuff?

Paul Oldham: I guess I’ve gotten to a point where it’s how I always work, or more often work than not. That’s where everything comes from. I’m really comfortable just sitting in a room with headphones on and a guitar, recording, editing, singing or whatever it is, whatever needs to be done.

AD: The album has a dark noir vibe. Did you share any musical reference points? When the folks from Perpetual Doom sent it over, the first thing that came to mind for me was X in terms of your voices together.

Paul Oldham: I don’t know how that fits in with everything, but that’s definitely not something I would shy away from. There are a lot of records we were listening to at different times when we were doing this stuff. One of them would be Alan Vega first record—we covered “Lonely” on the record. It’s just such a cool record because there’s nothing to it. It’s just so simple but it’s still really gratifying and fun. Not that we were trying to make his record at all, but that was definitely a touchpoint, like, “Oh cool, you can make a record that doesn’t have to have everything going on all the time. It can still be like a fun and compelling listen. We listen to a lot of Roy Loney and the Phantom Movers too—things along those lines, where it’s just sort of stripped down.

AD: I love the contrast between your voices. When you started playing music together, was singing involved pretty much right away?

Paul Oldham: Yeah, that’s Amber’s main way to express herself musically, writing and singing. It’s a fun push-pull for both of us to get to where we want to get. I’ve done things in other bands where I’ve just written the song and the singer will come in and just write the words. That, to me, makes a lot of sense. But we don’t really do it exactly that way. I’ll write the song and then Amber will come in, figure out a melody and then I have to change everything. [Laughs]

Amber Oldham: Paul may say I am a bit of a tyrant. [Laughs]