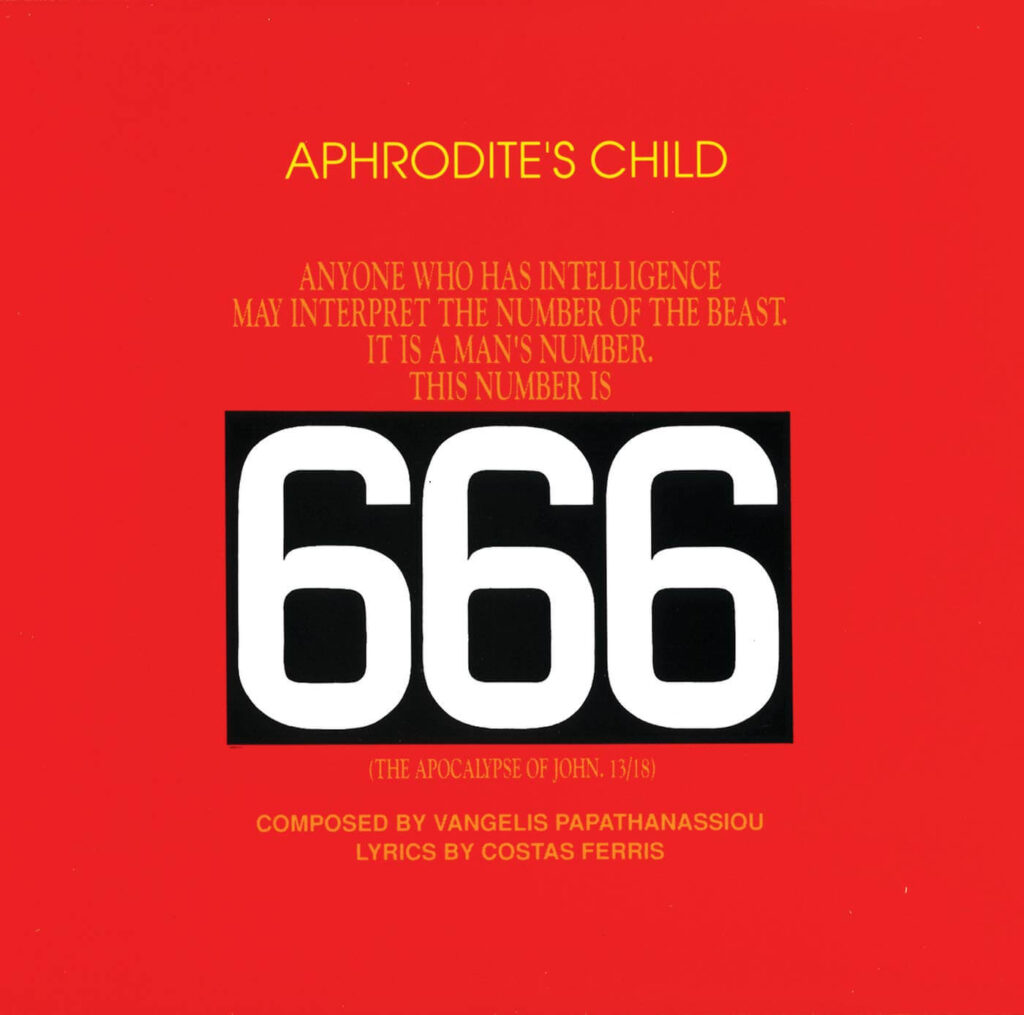 1997, a loft apartment in Dallas, Texas. Members of the avant-weird band Vas Deferens Organization had given me acid and were playing many of their most mind-blowing records to enhance our trip. Eventually, they cued up “All The Seats Were Occupied,” a selection from Aphrodite’s Child’s 666. Life hasn’t been the same since. Soon after this epiphany, I tracked down 666, a non-linear interpretation of passages from the Book Of Revelation, and discovered many more crucial songs from this Greek group led by keyboardist/flautist/vibraphonist Vangelis Papathanassiou (RIP). Last month marked the 50th anniversary of this opus, so it’s an opportune time to reassess its manifold riches.

Recorded in 1970, but not released until 1972, 666 was a departure for Aphrodite’s Child. Previous releases had trafficked in sentimental ballads and flowery pop, with only occasional flashes of exemplary psychedelia—see “Let Me Love, Let Me Live” and “Don’t Try To Catch A River.” The group had achieved European chart success with “Rain And Tears” and “It’s Five O’Clock,” but these musicians were too talented to keep treading tepid water, and Vangelis was too headstrong and ambitious to keep churning out fluff.

So, Vangelis—with lyrical input from the film director/actor Costas Ferris—sought to soundtrack the final chapter in the New Testament, and the results are suitably bombastic… and, uh, revelatory, even as the band members were squabbling among themselves and with Mercury Records, the company overseeing Aphrodite’s Child’s label, Vertigo.

To put it lightly, continuity wasn’t a priority on 666. Many of the transitions are jarring, some of the many interstices seem more baffling than resonant. But no matter. The brief lulls only make the great songs hit harder. Following the 23 seconds of “The System,” which includes the chant, “We got the system to fuck the system,” “Babylon” charges into battle amid raucous crowd noise, peppy claps, and Silver Koulouris’ hard-strummed acoustic guitar, which recalls Moody Blues’ Justin Hayward on “Question.” Rather than sounding like the end of the world, it heralds a new, bold one galloping into existence.

Another early-LP standout, “The Four Horsemen,” has become the most-sampled and oft-covered song on the album. Bassist Demis Roussos’ gorgeous, melismatic vocals soar over a forcefully moving and deceptively funky power ballad while Koulouris’ serpentine guitar solo launches the whole thing into the hippie-anthem pantheon. Also, it is here that Lucas Sideras’ beats demand that we enshrine him in the prog-psych hall of fame; and we must pay respect to engineer Roger Roche, who also worked on Heldon’s magnum opus, Interface.

On the prog colossus “The Lamb,” Koulouris further exhibits his dexterous chops, making his guitar sound like a bouzouki. Amid wild dynamics, tempo shifts, and strange modes, Harris Halkitis blows floridly heroic tenor sax, as Koulouris fingers filigree upon filigree that would make Gentle Giant shrink in awe. By contrast, “Aegian Sea” is a slow-blooming rock meditation that conjures a Pink Floydian wonder and languor.

More contrasts ensue. “The Battle of the Locusts” offers a 56-second burst of Zappa-esque freak rock that you wish would go at least five times longer while “Do It” acts as a continuation of “Locusts,” but with accelerated drum beats beneath the acid-rock-guitar heroics. The “Do it!” shouts allude to Yippie leader Jerry Rubin’s book of that title about revolutionary activism. Once again, Sideras proves himself a formidable drummer. Speaking of whom, Lucas sings with tongue-in-cheek heartiness on the groovy hippie funk of “The Beast,” which, experience tells me, will enliven any DJ set. A couple of notable interstices on the first platter include “Seven Bowls,” 85 seconds of stoned intonations about the horrific ecological effects of the apocalypse set to metallic percussion and “The Wakening Beast,” 67 seconds of reverbed wind chimes that cleanse the palate after the harrowing details of “Seven Bowls.” 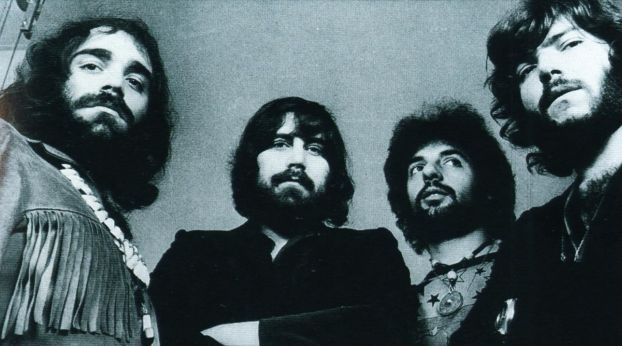 The second disc finds Aphrodite’s Child expanding rock’s parameters to even farther-out dimensions. “Altamont” advances with a relentless, foreboding thrust not unlike the part in the Chambers Brothers’ “Time Has Come Today” right before that unlikely hit accelerates into its climactic resolution. Meanwhile, narrator John Forst talks about seeing a lamb with seven eyes, a beast with seven horns, seven angels with seven trumpets, and other fantastic visions. “The Wedding Of The Lamb” sets wild flute parabolas, rousing sax, rolling and tumbling tom-toms, and sonorous chants within excellent dynamics and drama. The song conveys a potent sense of momentousness, way beyond what the Moody Blues were trying to summon on their conceptual opuses.

On “∞ (Infinity),” famed Greek actor Irene Papas delivers an outrageously libidinous vocal flex amid pounding drums. “I am… I am… I am to come I was,” she babbles with increasing urgency, unleashing a series of groans, heavy breathing, orgasmic shrieks, whimpers, and whispers. That shocker then hilariously transitions into “Hic Et Nunc,” a rollicking jazz-rock anthem that harks back to AC’s chart-dominating past.

I hope you’re sitting comfortably for “All the Seats Were Occupied.” It’s a masterclass in constructing a towering epic, from spare intro to catastrophic conclusion. Not unlike the United States Of America’s “The American Way Of Love,” “All The Seats” incorporates snippets from previous 666 songs into its circuitous journey. There is not one dull second in the nearly 20-minute piece. Every musician appears to be performing at the zenith of their capabilities. It sounds like the culmination of rock’s most ambitious impulses, as AC create a dramatic narrative that transports the listener to a sacred and hedonistic realm, achieving a climax that is simultaneously apocalyptic and multi-orgasmic.

Common sense would dictate that 666 end here, but Aphrodite’s Child did not operate under conventional wisdom. Instead, they closed with “Break,” a star-dusted ballad so beautiful and beatific, it would make Paul McCartney weep with envy. After the mind-blowing, sexy confusion of “All The Seats,” “Break” comes off like the Muzak™ in Heaven’s waiting room. It’s a soft-focus comedown that forces one to think that maybe the preceding 74 minutes were all a phantasmagorical dream.

As anyone alive knows, every forecast for apocalypse—and there have been plenty—has fizzled. It is Aphrodite’s Child’s special talent on 666 to make this lurid world’s end tale seem like the coolest trip imaginable. No amount of stilted thespian narration can dim the brilliance brandished here.

666 was the last blast of avant-rock exhibitionism for Vangelis (save for “Come On” off 1973’s Earth) and Roussos, as they moved on to much more lucrative music-industry realms. The former made bank in movie soundtracking (Blade Runner, Chariots Of Fire, etc.) and indulged his experimental synth impulses on the side (Beaubourg, Invisible Connections, etc.). The latter luxuriated in melodramatic, strings-heavy balladry. They probably rarely thought about 666 in the ensuing decades. But here’s the thing: Every time you see Sgt. Pepper’s, Marquee Moon, or any other Anglo-American sacred cow hogging space in the top 10 of a list composed by blinkered critics, know that somewhere in there a lofty spot should be occupied (like all the seats) by 666. | d segal