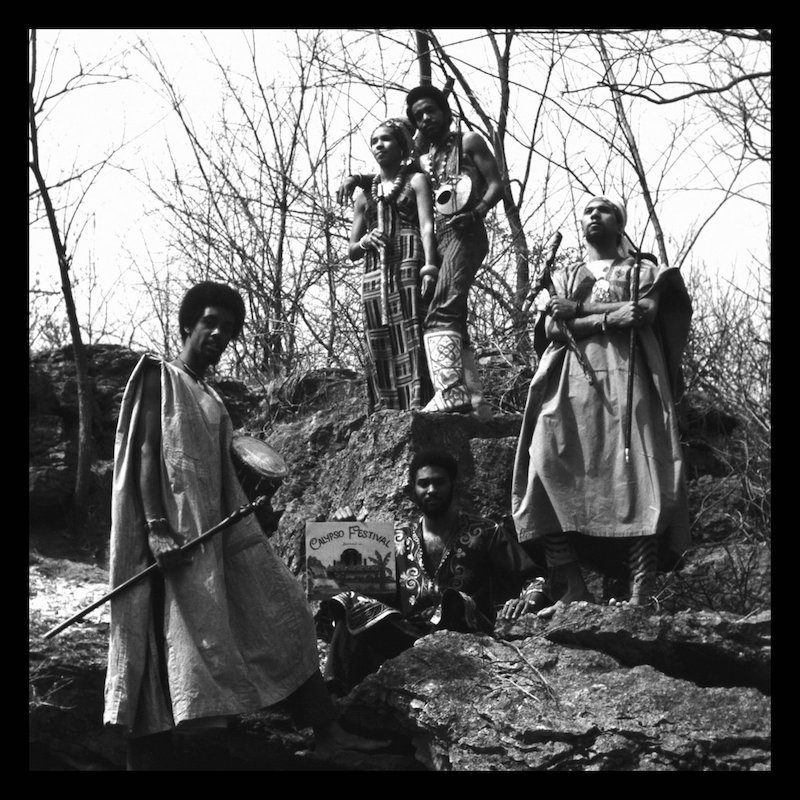 The molten wilderness of the late-60s Jazz realm was a sight of dismay to any traditionalist. Herbie Hancock’s Mwandishi band had defied the laws of space and time. Pharoah Sanders was in the middle of creating a string of albums built on one or two chords that would turn him into a living legend. Alice Coltrane was expanding consciousness through a hybridization of Indian Classical sounds and cosmic minimalism. In seven short years of recording Albert Ayler turned the very definition of a ‘standard’ on its head–taking tradition, breaking it down, and building it back up into whatever mercurial form (or lack thereof) he saw fit at that moment. Every boundary would be crossed, every rule up for reevaluation or omission: it was a death knell.

From a nucleus of Free music luminaries, emerged a new generation of unrestricted Jazz pioneers. Further removed from the developments of Hard- and Post-Bop, these young musicians were cutting their teeth on the Avant Garde. Enter, The Pyramids. Formed under the almighty guidance of Cecil Taylor, the group was involved with his Black Music Ensemble at Antioch College in Ohio. Amid their studies – which included travels through Ethiopia, Morocco, Uganda, Kenya, and Egypt – The Pyramids released Lalibela in 1973. This was followed by King of Kings (1974) and Birth/Speed/Merging (1976). The impact of their time abroad was immediately apparent and the message crystal clear: The Pyramids intended to create Liberation Music wholly inspired by the ursprung of African art.

Strut has compiled The Pyramids’ initial 1970s output in an expansive 4LP Set—Aomawa: The 1970s Recordings. In addition to the ensemble’s trio of self-released records, there is a chance to hear the energy emitted from the group in-person on Live at KQED. Recorded in 1975, this set captures the group in the middle of their initial run. And it should be noted: don’t expect your grandmother’s Spiritual Jazz. The approach here is aggressively direct. The lushness, warmth, and Zen-like qualities associated with some household names are thrown from the window. Lalibela makes this known within moments. A barrage of percussion kicks off the album. Authentic African instruments provide welcome microtonal accents, sometimes hitting seemingly out of tune runs that keeps listeners on their toes. Halfway through the sidelong (and then some!) title suite, the group manages to top the sonic assault with what could be the most ferocious bass playing ever recorded. This prompts an ascent to an aural plane shared with the Rif Mountains’ master musicians. The swell calms, and yet, the listener fights to keep up as flutes and pan pipes dance over varied layers of percussion.

Kings of Kings introduces a greater fidelity in sound quality, but this does not come at the cost of intent. Chanting and breakneck drumming set the pace of the record as the group employs an all-out wall of sound. More attention is given to the saxophone pyrotechnics of Idris Ackamoor, who employs Coltrane’s sheets of sound technique to stay afloat in the current. The final section of “Queen of the Spirits” offers respite. A truly beautiful moment adorned with bells, bowed bass, sultry chants, Ugandan harp, and balafon. “Nsorama” documents the closest The Pyramids had come to the sound of their peers on Impulse, Strata East, and ESP Disk. A near 20-minute dirge driven by expansive piano vamping (one of the few moments where the groups percussive elements aren’t the centerpiece), the piece wanders and rambles over minor key changes engaging in pastoral groove as the ensemble builds to an exploration in atonality. It’s a formula regularly used by Pharoah Sanders. But these don’t sound like professional Jazz musicians embracing African modalities. The inspiration seems inversed; as if traditional African instrumentalists were trying their hand – very successfully – with American Jazz. This theme remains on the group’s final record of the seventies.

The influence of Cecil Taylor, Coltrane (Alice and John), and Ayler permeate all aspects of The Pyramids output. Missing, however, are the limitations placed on those prior musicians by their formal training in earlier forms of Jazz. This is most apparent on Birth/Speed/Merging. Despite the layers of chants, bells, and indigenous African instrumentation, the 1976 record is their most ‘American’ sounding. Though it’s hard to define the idea explicitly, this is a record that would have been more than comfortable on Strata-East, Philly Jazz, or any number of small labels popping up in the late seventies. In the absence of those lessons in Hard Bop, Blues, and even early atonal composition, the ensemble culled a unique sound to define a lost generation of Jazz Musicians.

Based solely on the trajectory of American music history if you weren’t an established name in Jazz by the end of the 1950s or early 1960s, picking up a major record deal was near impossible. Pair this with the fact that Black artists had already been abused by these companies for nearly half a century and the odds were dismal. There were exceptions, of course, but these seem limited to Fusion or, to a lesser extent, the European Free Improv scene. The large-scale abandonment of the genre by record company executives created an environment actively hostile to the practitioners of America’s greatest art. As a result, proper assessment of the young musicians brought about in the aftermath of the tumultuous sixties is incredibly difficult. Artists either recorded for small labels with limited sway in the big ‘Pop Culture’ picture, released privately recorded records without adequate reach (the case with The Pyramids), or never put anything to tape at all. Fortunately, in the 21 st century, there are active efforts to grant these artists the recognition and payments they are due. For many it’s too late, but with Aomawa, we finally have The Pyramids’ own account of their art. | j rooney