Good nature, “kushka” and “meadow”. What memory did the Russians leave in California 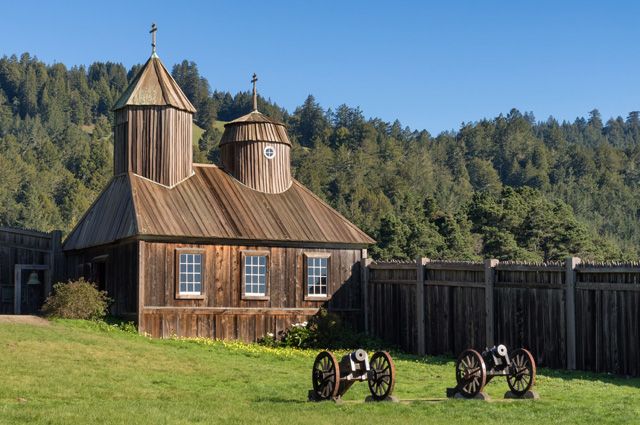 200 years ago, on September 11, 1812, under cannon and rifle salute, the official opening of the Russian colony in California, founded in March, took place. She spent all these several months nameless and received the name only six months later. Russian fortress “according to the lot drawn before the icon of the Savior” was named Fort Ross.

Alexander I did not honor Napoleon with an answer

The day was also chosen for a reason. September 11 — it's new style. In the old way, it comes out on August 30 — Name Day of Alexander I, Emperor of All Russia. Which, judging hastily, was absolutely not up to the gun salute in honor of the opening of some colony there, 15 thousand miles away. Rifle and cannon fire at that time was heard much closer — the volleys of the Battle of Borodino barely had time to subside. And in three days the troops of Napoleonwill enter Moscow. What is California like here?

However, it turns out that the colony was founded very timely. Just from Moscow, Napoleon offers the Russian Emperor peace — on absolutely enslaving terms. The Corsican did not wait for an official answer — too much honor. But on the sidelines, Alexander I had the opportunity to express everything he thought about the proposed peace: “I’d rather lead a militia of peasants, grow a beard for myself, eat only bread and retreat fighting to Alaska, but I won’t sign such a peace!”

The intention is commendable. But in order to retreat to Alaska, one must have this same Alaska at one's disposal. And in order to eat at least “one bread” at the same time, it is necessary to make sure that this very bread in Alaska is in abundance and that it is imported not from Russia, but from some territories closer. The colony in California was just intended to supply Russian Alaska with bread, and food in general.

With all seriousness of intentions

I must say that attempts to gain a foothold in California were also made before. And at a very high level. Father of Alexander I Emperor Paul Iperfectly understood the importance of the colony in California for the development of Russian America. Evidence of that — events of July 1799. On the 8th, the emperor signed the Decree on the founding of the Russian-American Company, and on the 15th, that is, exactly a week later, he declared war on Spain, which laid claim to all of California. Not a single shot was fired in this war, and therefore it is perceived as a kind of curiosity, hastily hushed up after the tragic death of Paul I.

However, Russia has clearly indicated its intentions regarding California. Commander Nikolai Rezanov, the same one who in 1806 achieved an engagement with the daughter of the commandant of San Francisco under the muzzle of Russian guns, wrote shortly before his death: “If in 1799, when war was declared to the Gishpan court, our company was in the appropriate forces, it would be easy to take advantage of part of California before the Santa Barbara mission, and to keep this flap forever behind us … Now there are still lands that are just as profitable and very necessary for us. If we miss them too, what will posterity say?

In a word, the founding of Fort Ross was an attempt not to miss the “necessary and profitable lands.” The leadership of the Russian-American company must be given its due — they did not hesitate. In 1811, a native of the city of Totma, a desperate traveler and businessman Ivan Kuskovbuys about 400 hectares of land from the Pomo Indians of California, giving away three blankets, three pairs of trousers, two axes, three hoes and several strings of beads. The price, of course, is ridiculous, and Ivan Aleksandrovich could be reproached for the “shameless deception of the unfortunate natives.” But there is one caveat. Russian land all the same bought, albeit at a ridiculous price. But the Spaniards, who laid their hands on almost all of California, took the land for that, and even threatened with weapons.

Incidentally, the good memory of the Russians was entrenched among the Californian Indians for a long time. Vasily Aksenov's story “Non-Stop Around the Clock”, written after a trip to the USA and published in 1976, contains a direct speech by the American linguist, professor of Slavic studies at UCLA University, Dean Worth: “The word “cat” has long been known in California. The Indians who lived in the San Francisco area called the cat “kushka”, spoon — “luzhka”, in general, they had a lot of Russian words in their vocabulary…»

Which, in general, is not surprising. Compared with the Spaniards, the Russian colonists were, for the Indians, if not “white and fluffy”, then very close to it. Naval officer Dmitry Zavalishin, who visited California in 1824, had the opportunity to compare the life of the Indians near Fort Ross and in the Catholic mission of San Francisco, where he studied Spanish under the guidance of the head of the mission, Padre Thomas. So — Judging by the memoirs of Zavalishin, the Indians always saw Russians as their intercessors: “The Indians were very fond of good-natured Russian sailors, and especially generous and affectionate officers. I know that every visit to the mission was a holiday for them. As it happened, missionaries do not bargain with me, but I will still ask someone for forgiveness or mitigation of punishment for disciplinary offenses.

Scientist, entrepreneur and one of the directors of the Russian-American Company Kirill Khlebnikov expressed himself in a higher style. In his letter to Alexander Pushkin, which was sent three weeks before the death of the poet, Khlebnikov noted: “The brave but cruel Spaniards with a cross in their hands in the name of God eradicated idolaters. Rough and strong Russians with a cross on their chests made it a sin to destroy the wild in vain.

Here, of course, one can refer to the fact that this information belongs to interested and biased people. But here is what the French merchant Auguste Bernard Du Scilly, who visited Fort Ross a year after its foundation, wrote: “I did not find here either disorder or rudeness, which, alas, are not uncommon in the Spanish presidio. Opposite — well-roofed, beautiful houses, neatly planted and palisaded fields, and a perfectly good-natured atmosphere.

There was simply not enough strength

In 1836, the population of Fort Ross numbered 260 people. It consisted of “56 Russians, 115 Creoles, 50 Aleuts and 39 baptized Indians.” In the conditional “Russians” due to race, a completely unexpected Englishman by blood Nick Betre — apparently, a runaway sailor from an English ship, who found shelter and understanding among the Russians along with the “baptized Indians”.

Everything would be fine, but it was a drop in the Spanish sea surrounding the land of Fort Ross. Yes, all foreigners who ever visited the Russian colony in California were delighted. Englishman Frederick Beachyso he wrote: “Their new settlement in Ross is an example to all California of what industry and labor can bring here.” But there were simply not enough Russians. The colony provided for itself and even sent food to Alaska, as intended. But there were too few Russian colonists. Perhaps the matter could be corrected by the project of the Chief Ruler of Russian settlements in America Alexander Baranov, who in 1817 believed: “Someone of the patriots who sympathize with our cause could buy at least 25 families peasants who, for resettlement in America, will be given freedom and arable land near Fort Ross. However, this project remained a — permits for “adventure” was not given.

All this led to a sad result: “Due to the clashes between the Spaniards and Americans with the Russian colonists and the lack of support of the latter from the Ministry of Foreign Affairs, the Russian-American company had to leave their settlements in California.” In 1841 Fort Ross was sold for $30,000 to a Swiss entrepreneur Johann Sutter. Seven years later on the lands of John Sutter — this name was taken by this Swiss — the famous California gold rush broke out.