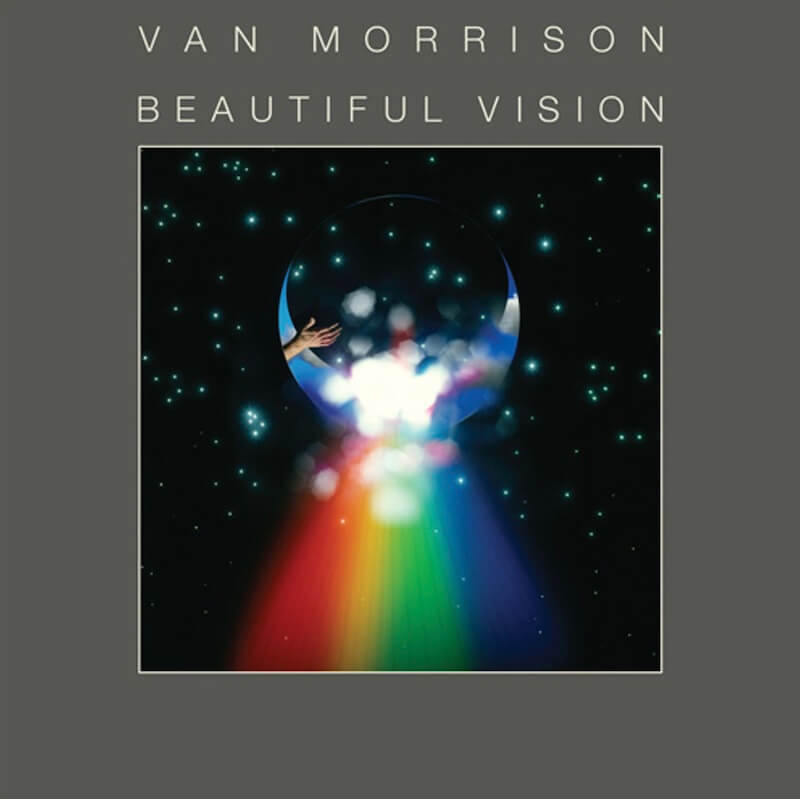 With Common One, Van Morrison embarked on the most distinctive public soul-search of any artist on the radar of the popular consciousness. Retrospectively regarded by many as his most accomplished record, the string of releases to follow would serve as companions in staking out a New-Age Celtic spirituality built on channeling legacies as far flung as Jimmy Rogers, Ray Charles, Christmas Humphrey, and L Ron Hubbard. Critical as any of these to Van’s Celtic Guru years was an interpretation of Alice Bailey’s theosophy. The ideas were laid out on Van’s 1980 masterwork, but the seven rays never radiated as brightly as they did on Beautiful Vision.

From the opening notes of “Celtic Ray,” a new wind blows through the chasms of Van’s brooding soul. Further fleshed out is the emerald isle’s nuanced impression on his upbringing. A step beyond the contemplative green musings of Veedon Fleece. “Summertime in England” announced the idyll of a romp through the countryside, but here, Van wails of a full-fledged homecoming across the Atlantic.

Notably, there is a patience to this music. This overwhelming vision didn’t spontaneously manifest to Morrison at the dawn of the decade. And it’s noted that further development would be necessary to be lifted up by that angel of the present. The great “Cleaning Windows” is often cited as one of the last remnants of classic Van—the soulful, yet rockin’ proletarian blues with a hook that manages to wind itself into the ear for days. Beautiful Vision’s true power-single that wasn’t, however, remains “Dweller on the Threshold.” This is where Van stakes out his current position—on the cusp of enlightenment. The rough and tumble blues holler of ‘The Angry Young Them’ is subdued, standing at the edge of the light. He waits for the signal before seeking passage. The power of 80s Van lies in this transitional moment. Still able to access the angst, yearning, and unknown of his greatest music until this point, but to paraphrase Common One’s “Satisfied,” Morrison has ‘made it.’ In fact, the first few records of the 1980s are filled with tunes that highlight Morrison’s fulfillment with the music he is currently creating. A rarity for the perennially frumpy artist and a clear indicator of the personal nirvana these recordings were pulled from.

Even the increased self-worth of this period could not quell the more sinister side of the psyche. But perhaps this is what makes these records so important. That someone so prone to jealousy and hubristic impulse could channel lifetimes of wisdom, struggle, and ultimately, coming to peace. And despite the vanishing hairline and premature wrinkles, this is still coming from an artist in his 30s. Of course, one standing at the edge of the light cannot have it all figured out and Van had yet to fully transcend his limitations. The sublime “Aryan Mist” is a song filled with doubts and contradictions, despite its sonic qualities wrapping listeners in assurance of its singer’s musings. The tune is filled with false baptisms, the weighing of eastern and western philosophies, and even equating the whole of commodified spirituality as a drug (the ‘railway carriage charm’ is rumored to be an allusion to speed pills).

In closing the album, Van takes a further step to indicate, not just the changing direction of his sound, but the overall philosophy on what his music is. For the first time in 20 years of making music, the voice that built his reputation is removed from the formula. Synthesizers and piano dominate the departing “Scandinavia.” There had been tastes of New-Age sensibility leading to this moment, but this was the full absorption. Standing somewhere between triumphant film score and meditation, one can nearly see the singer silhouetted at the threshold; basking in the knowledge that whatever barriers had kept him tethered in those weightless moments of Astral Weeks, Veedon Fleece, or Common One had now been removed. | j rooney